Anonymous Hacks Russia’s Central Bank, What Can Happen Next?

Apecoin (APE) appears to be the next big crypto in town, at least based on the performance over the last few days. The token, which is linked to the Bored Ape Yacht Club NFT project, has been surging today, and it doesn’t seem like it’s about to stop. Here are some of the details: 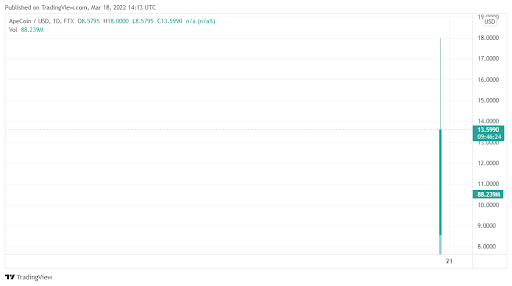 Apecoin (APE) – where does it go next?

Apecoin (APE) was listed on the FTX exchange for the first time. As with many initial launches, there was a lot of volatility. In fact, at one point APE was trading as high as $40, only to crash to $6.3. But that early volatility has started to ease off.

APE is consolidating its demand and at press time, it had surged by over 85%, trading at around $14.3. The Apecoin is one of the major NFT coins released this year. It is linked to the Bored Ape Yacht Club or BAYC, an NFT collection that has seen sales hit millions of dollars.

The 85% surge today is likely to pull back as early investors cash in. We expect APE to finally stabilize between $10 and $12 by the start of the week.

Is Apecoin (APE) worth buying?

NFTs are no doubt capturing the imagination of a lot of investors. After they reported a lot of growth last year, it is likely that in 2022 and even beyond, NFTs will become a huge part of the crypto industry.

In that case, projects that give you more exposure to NFTs are always highly recommended. The Apecoin (APE) is a perfect example of such a project. The fact that it’s also new also makes it a good option.