Atlantic City: Workers union warns of “labor disputes” if casinos do not agree to new contracts by May 31 | Yogonet International

On-chain analysis is fascinating to me. Exclusive to the blockchain, it doesn’t exist outside of crypto. But in jumping on-chain, we can often get intriguing insights into market sentiment, and specific indicators have even been predictive of future price action.

Of course, given Bitcoin’s short history of just over a decade, it’s not yet clear which indicators are merely coincidences and which carry actual value. But that’s part of the fun, no?

Percentage of Supply in Profit

I came across an exciting indicator this week on Twitter, compiled by @OnChainCollege, who is a great follow if you’re into on-chain analysis. He looks at the percentage of Bitcoin supply in profit to gauge how overheated (or cooled off) the market is. Historically, this has signalled the start and end of the bear markets quite well for Bitcoin.

And these bands are very close to crossing at the moment. 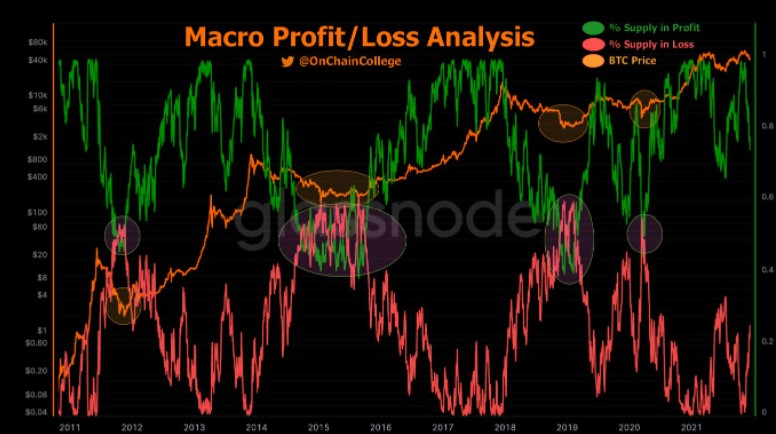 As you can see, this has crossed only four times previously. The most recent was March 2020, when the onset of COVID rattled the markets. In my view, this was the scariest time in crypto history – a true existential event (to be honest, it felt like it was an existential crisis for the world as a whole).

To play devil’s advocate, you could probably write this instance off as a black swan event, and overlook the impressive bounce that followed the crossover here – fine. But in looking at the other cases, the prediction ability holds in all three cases: 2019, 2014 and 2011.

That’s all well and good. But what is the market saying now? Well, the percentage of supply in loss has not crossed the percentage in profit – yet. If the pattern holds, that means there may still be more pain to give before the bottom is in.

Obviously, any on-chain analysis comes with the caveat that not only is the sample space small, but the data may be non-structural, with material changes to the landscape. Today, we are seeing rampant inflation, a hawkish Fed and a scary geopolitical climate. This has triggered the worst start to a year for stocks since 1939.

These macro headwinds mean that, for the first time in Bitcoin’s history, it is swimming upstream against serious and consistent bearish sentiment – April was the worst month for stocks since October 2008. Additionally, Bitcoin has almost nothing in common today with the niche Internet money it was back in 2011, or even 2014. Today, it takes its place amid bonafide asset classes, with institutional money pouring in and a seat at the macro table.

All this means that there is far from a guarantee that history repeats itself here, should these bands cross again. Nonetheless, it’s a fascinating trend to keep an eye on and a neat use of on-chain analysis from an analyst who is a personal favourite of mine. It will be fun to track going forward.