Bitcoin’s (BTC) latest tumble appeared to have blindsided investors hoping that the cryptocurrency would find a bottom. Liquidations of long positions reached their highest level since late-January, as BTC extended its losses.

BTC slumped below $40,000 for the first time since mid-March, following signals from the U.S. government that inflation is expected to get substantially worse in the country. March consumer price data due later today is set to come in at its highest level in 40 years.

The broader crypto market also tumbled, with most top altcoins shedding between 2% to 8% in the past 24 hours.  Total crypto market capitalization sank by $150 billion in the past week, and was below $2 trillion once again this year.

$385 million worth of long positions liquidated

The crypto market saw $385 million worth of long positions liquidated in the past 24 hours, data from Coinglass showed. Nearly 90% of all liquidations that occurred overnight were long, indicating that a majority of traders had been positioning for a recovery.

Of the $442 million total liquidations that occurred, only $57 million were short. BTC saw $142 million longs liquidated, about 87% of total closures.  The largest single liquidation order was on Bitmex, valued at $10 million. 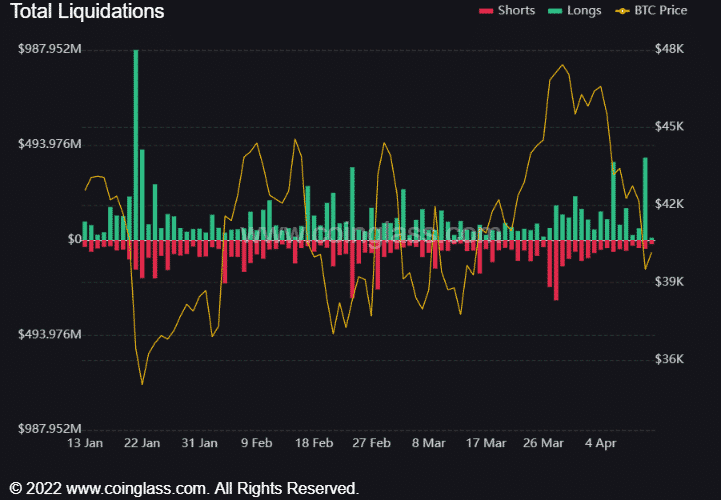 The losses come in line with broader risk markets, especially stocks. They underline the high amount of correlation between crypto and equities.

Markets search for a BTC bottom

BTC’s recent tumble has spurred speculation over where the losses will end. Some traders speculate that $37,000 to $38,000 will be the token’s next support level, while others warn that the token could go as low as $30,000.

BTC’s lowest level this year is around $33,000- one that could be considered as a hard support level. Any falls below that would likely spell an extended bear market for the world’s largest cryptocurrency.