Cronos (CRO) could see a 15% correction in the coming days

Here’s why the Unifi Protocol (UNFI) price is defying gravity

Cronos (CRO) has continued to struggle to maintain its recent uptick in price. There were hopes that finally, the coin would manage to cross past $0.5, but despite bulls pushing it to the limit, CRO failed. The coin is now staring at a possibility of a major correction. Here is what to know: 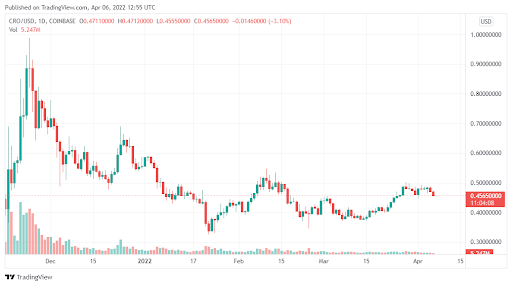 After a steady rise over the last two weeks, off-late CRO has been displaying several bearish technical signals. First, it seems the coin’s upside at the moment is capped at $0.48. In fact, CRO has tried to break above the $0.5 mark five times and has failed.

It is clear that the coin has no upward momentum right now, and the only way is down. The RSI divergence also suggests that a pullback is going to happen at any time. We expect CRO to retreat towards $0.43 in the days ahead as it tries to generate demand.

If bulls are not able to push the price back up again, CRO will bottom at around $0.41 or thereabout. However, if the coin can somehow manage to break the $0.5 barrier, then this analysis will become null and void. We do not see this happening though in the days ahead.

Why CRO has struggled past $0.5

So far, the $0.5 mark has proved to be the most difficult overhead resistance for CRO. It is likely that this is basically a psychological barrier.

Since the coin has failed so many times before to smash past it, most traders would rather take a profit at around $0.5 instead of facing any serious upside risks.