Gensler Wants Both The SEC And CFTC To Regulate Crypto Together

The broader crypto market has started the new week the same way it ended last week. Most coins have continued to report losses. But in the middle of all this, Decentralized Social (DESO) appears to be holding steady in fact; the coin is relatively bullish compared to the rest of the market. Here is what you need to know: 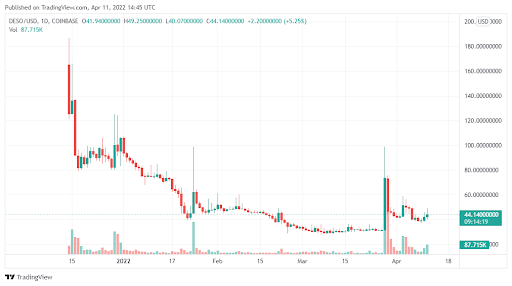 As noted above, DESO has managed to outperform the whole market by a mile. As most coins see single-digit drops today, DESO has surged by over 10% over the last 24 hours alone. The coin has now gained nearly 70% from its lowest point in 2022 and looks to keep going.

Besides, DESO remains above the crucial support zone of $37.50. As long as bulls keep the price action above this, then we could see DESO thrust towards $54 in the near term. The biggest risk factor, however, is massive whale accumulation for this coin.

This makes it prone to wild volatility if big wallets decide to sell. In fact, a scenario where DESO loses the $37.5 support is possible. This could bring massive sell-off pressure and push the price downwards.

Is DESO a profitable asset?

Well, it is and it depends on how you want to play the current setup. DESO may still add at least 20% of its value before it corrects, so there is a short-term play here. This will however depend on whether whales decide to sell or not.