The crypto market, in general, has steadied after a very volatile period during the start of 2022. Analysts are now focusing on long-term outlooks, and one coin that has grabbed the attention of everyone is Kava (KAVA). Could it actually hit $40 by year-end? Here is what you need to know: 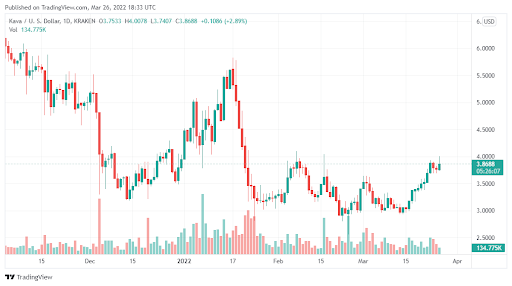 At the moment, KAVA is trading at around $3.89. Based on the performance of the crypto market over the last three months, it’s hard to imagine that KAVA could grow 10x before the year is out. But it’s actually not that hard to imagine.

There are several reasons for this. First, Kava is adding EVM support. The move will make it interoperable with ERC 20 tokens. This is likely going to push more DeFi projects into the network. Also, EVM support means that apps already built for Ethereum can be deployed on Kava.

In addition to this, it seems like the sentiment in the market is actually looking better than it did three months ago. Investors have started to price in the economic and geopolitical factors at play. As the broader market surges, KAVA could still follow. Despite this, we still think there are so many downside risks that will make the $40 dream very hard to achieve.

Is Kava (KAVA) worth the risk?

Kava is a great project and has been for the last few months. It has simply suffered from the general trend in the market. But its long-term value still remains very high. The fact that it’s adding more interoperability into its system is a big deal. Even if it doesn’t hit $40, it could still offer 3x or 4x growth.