FED Sees Stablecoins As Financial Instability Due To Insufficient Liquidity

Bitcoin (BTC) saw its biggest number of long liquidations since late-Jan in the past 24 hours, data showed on Friday.

The world’s largest cryptocurrency sank over 8% to as low as $35,000- its weakest level since the onset of the Russia-Ukraine war. This triggered the liquidation of over $160 million positions hoping the token would trade in the opposite direction.

Trouble in the crypto market is being magnified in futures and options trading. Over $400 million worth of positions were liquidated in the past 24 hours, as crypto’s latest slide caught many investors off-guard.

The crypto market lost about $130 billion in market value in the past 24 hours, as concerns over an economic recession and rising interest rates weighed heavily.

Liquidation data from Coinglass shows that over 85% of all liquidations in the past 24 hours were long positions, amounting to $368 million.

$164 million long positions on BTC were liquidated-their highest number since a similar scenario in January.

The data indicates that traders expected the world’s largest cryptocurrency to rise after a mild recovery on Thursday- a scenario that clearly did not play out. 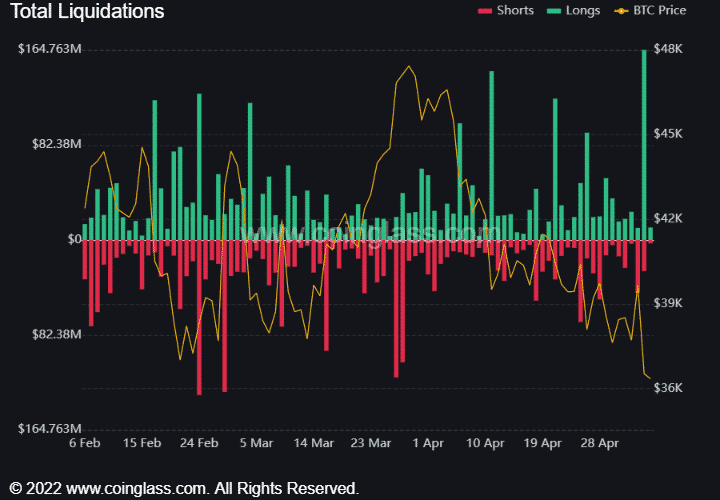 BTC long positions have been consistently getting liquidated this year, blindsiding investors hoping to call a bottom to the token’s losses. The factors behind the crypto rout have remained the same. Traders are wary of a possible economic recession, as well as rising interest rates.

Besides BTC, top altcoins also saw a surge in liquidations over the past 24 hours. Newcomers STEPN (GMT) and ApeCoin (APE), which outpaced the crypto market in April, saw some of the biggest liquidations apart from Ethereum (ETH).

Both GMT and APE saw around $12.5 million liquidated each, of which nearly 78% of  positions were long.

Top altcoin Ethereum saw $69 million positions liquidated, with a 92% ratio of long positions- much higher than its peers. Traders were likely expecting the token to gain some support ahead of a widely anticipated shift to a proof-of-stake model.