DJ Khaled, David Guetta, Future, Sven Väth, Busta Rhymes, Ricardo Villalobos, Jamie Jones, Carl Cox, Seth Troxler, Bruno Mars, Gordo, Eric Prydz, Tiësto and many more all play
MDLBEAST Soundstorm is the biggest and most influential music festival in the Middle East and it is back bigger than ever from December 1st – 3rd 2022. This multi-day celebration of music, art and culture from all over the world welcomes over 200 international and local acts and has seven supersized stages with next level production. MDLBEAST Soundstorm 2022 tickets are available now on mdlbeast.com.
The awe-inspiring festival site on the outskirts of Riyadh is a technological wonder that appeals to all your senses. It is like a real world virtual reality with giant LED screens and immersive visuals, bright neons making it feel like a futuristic party metropolis and towering stage designs that are like nothing you have ever witnessed before. The sound systems and lighting rigs are out of this world with huge sculptures, supersized arenas, and 3D mapping all ready to make for an escapist experience like no other.
The stages at MDLBEAST set an all new benchmark and include The Big Beast – officially the world’s tallest temporary festival stage – with big vibes from artists like DJ Snake, Tiësto, Hardwell, Dish Dash, Baloo and Zedd on the opening night. Friday brings globally renowned hip-hop stars Busta Rhymes and Fat Joe will join Grammy Award-winning American rapper, songwriter and record producer Future, alongside Rick Ross. The legends will perform together with DJ Khaled as part of his ‘DJ Khaled & Friends’ set while minimal king Luciano also plays. Saturday is all about Bruno Mars, a solo set from David Guetta, Ricardo Villalobos and Marshmello.
The Dance Tent is where the best in electronic music is showcased and on the opening night Future Rave stars Morten and David Guetta headline with the likes of Gordo, Eric Prydz who make this debut and Meduza as well as Dish Dash. Friday welcomes Nervo, Claptone, Cedric Gervais, Timmy Trumpet, AfroJack and R3HAB and Saturday finds Dimitri Vegas & Like Mike, Steve Aoki, Lost Frequencies, Morten, Acraze and more.
The Underground stage is divided into four different sub stages with the most clued up house and techno from Cirez D, Artbat, Carl Cox b2b Nic Fanciulli, Carl Cox solo, Sven Väth, Jamie Jones b2b Seth Troxler, Butch, Polo & Pan, Thomas Melchior and more on Thursday. On Friday, Adam Beyer, Maceo Plex, Anna, Loco Dice, Cassy, Hot Since 82, Damian Lazarus, Fred P, Janet and more will line up and on Saturday Luciano, Solomun, La Fleur, Ricardo Villalobos, Solardo, James Hype, Art Department, Chris Lake and more bring the quality.
Finally, Down Beast is for indie, hip‑hop, R&B and LoFi from the likes of Jorja Smith, Rae Sremmurd, Naika and Saudi singer Mishaal Tamer across the three days.
On top of these big names, the festival will feature some top local talents and a strong Saudi female lineup with Biirdperson, Cosmicat, Dorar, Kayan, and Solskin hitting the decks along with Dish Dash, Vinylmode and DJ Aseel, plus some extra special guests Mohamed Hamaki and Nancy Ajram will be taking to the stage with other acts for special collaborations.
The scene is now set for a cultural celebration on a whole new level, Get your tickets now at mdlbeast.com. 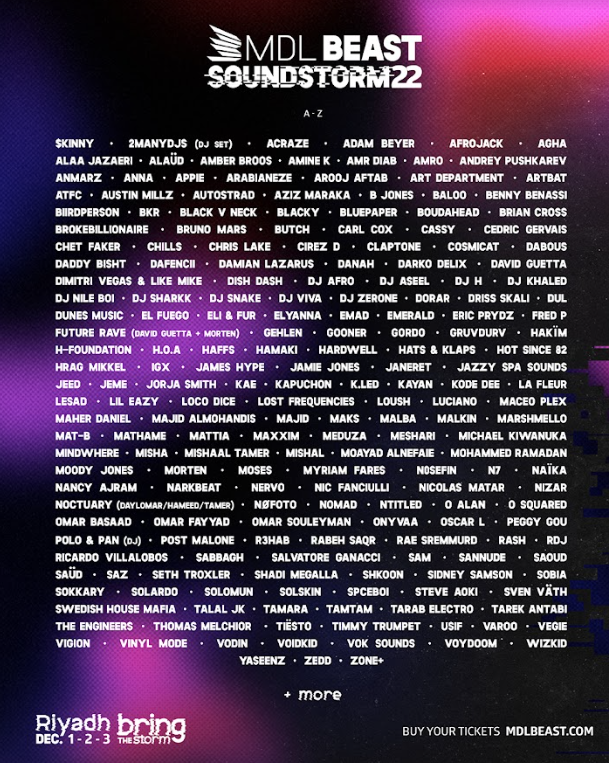