Polkadot (DOT) could plunge after correction from its recent rally

Ethereum price prediction for May 2022

Ethereum At $3028, Where Is The Next Critical Support Level For ETH?

Polkadot (DOT) has finally managed to get closer to $10 after falling sharply over the last week or so. The coin has also seen decent gains this week as it recovers most of the losses reported in the middle of May. But this bull run is losing steam and a correction appears imminent. Here are some important points: 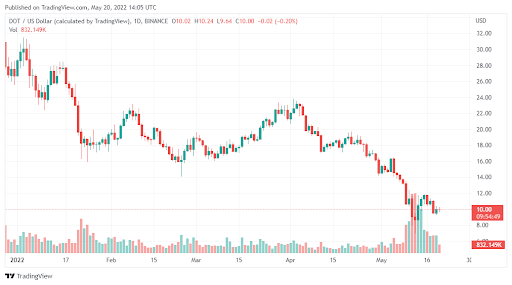 It’s not the first time DOT has done a “fake out” this month. In fact, at the beginning of May, the altcoin tested $10 once more only to be rejected sharply at $10.5. We don’t think conditions in the market have changed that much. In that case, DOT will still fail to surge past $10.

Besides, the coin has already gained a lot from its May lows. Although the bullish momentum has been good for DOT bulls, at some point it was expected to retreat. DOT will likely retrace the $7.35 support before it tries to rise again. This will represent a loss of around 27% from the current price.

The price will also be around 70% lower than DOT’s highest price in 2022. However, if bulls can somehow manage to find enough demand to push above $10.5, then DOT will likely push further towards $16.

Why DOT is still a decent buy

The recent price drop in most altcoins has been painful. But this does not change the long-term outlook. Coins like DOT offer incredible utility and are backed by very serious projects.

It is likely that DOT will return above $20 somewhere this year. That would still be a 2x multiple from the current price today. There is therefore so much upside.