Top 3 coins that could trigger the web 3 revolution

There has been a lot of talk about the coming web 3 revolution. It is seen as the next age of the decentralized internet and a lot of tech companies are trying to own the future. So, what do we know so far about the web 3 revolution? Here are some notable developments:

But what are some of the key blockchain projects right now that have the potential of triggering the Web 3 revolution? Here is our top 3 list.

Ankr (ANKR) is a leading decentralized cloud computing service that has for years now been trying to rival centralized cloud providers like AWS, Microsoft, and Alphabet. Ankr basically allows people to share their unused computer resources and earn a return in the process. 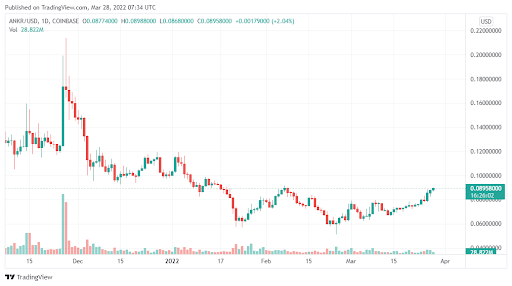 It is one of the key projects that could provide the basis of the computer power needed to power a fully decentralized internet. Also, Ankr has been adding several interoperability features and is already compatible with over 40 chains.

The key to Avalanche (AVAX) as a huge driver of the web 3 movement is its sub-chains. Avalanche basically allows developers to create small sub-chains within its main network to specifically power their DAPPs. Think of it as the windows or android for blockchains. This is likely to unleash massive innovation.

Golem (GLM) works in the same way as Ankr. It is designed to help crowdsource computer resources and deploy them wherever they are needed. As noted above, decentralized computing power will be the driver of Web 3, and projects like Golem will make that happen in a big way.