Bitcoin appears to have entered a short-term bear market over the past week. This is the 7th day in a row the large-cap coin is closing on the red. More downside is also likely to follow in fact, BTC will probably bottom at $20,000 before it regains some of the crucial support zones it has already lost in this downtrend. Here are some highlights: 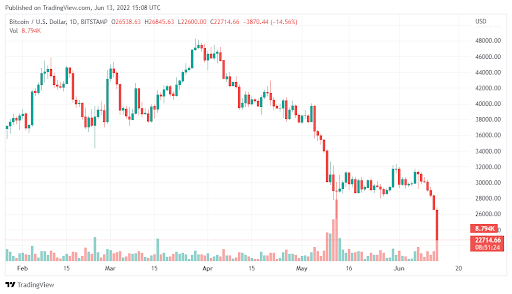 Why the BTC downtrend will continue

After seeing losses for 7 straight days, you would expect a coin as large as BTC to have a trend reversal or pull back. However, we don’t see this happening in fact, the downtrend will likely push the coin towards a $20,000 bottom before any leg up.

Also, as the price action falls, we have seen a corresponding drop in trade volume. This suggests that investors are staying away from crypto right now. As such, it will be very hard for BTC to find significant momentum in the short term to push it up.

At this rate, Bitcoin will, in the best-case scenario, likely retrace its 200-week moving average of $22,000 and try to find support here. But bears appear to have the upper hand. As long as the trade volume remains suppressed, downward pressure on the price will continue to be strong.

But it did and right now, many analysts are worried that the bull run is over. So, it’s not going to be a surprise if BTC falls below $20,000. This will trigger a major sell-off that could see more losses follow.