Russia To Regulate Crypto Mining Despite Surge In Electricity Consumption

Bitcoin’s (BTC) abrupt tumble from 2022 highs caused a string of large liquidations in the market. Big long positions- which expected the token to find a bottom- saw some of their biggest liquidations this year.

BTC fell from near $48,000- its highest level this year- to $42,400 in little over a week. The token’s sharp decline is attributed to growing concerns over inflationary pressures this year, as well as aggressive measures from the Federal Reserve to curb prices.

Weakness in the token also spilled over to the broader crypto market, bringing total market capitalization back below $2 trillion by Saturday.

About $222 million of long positions were liquidated over the past six days. The data showed that a large number of traders betting on more BTC gains were blindsided by the token’s fall. 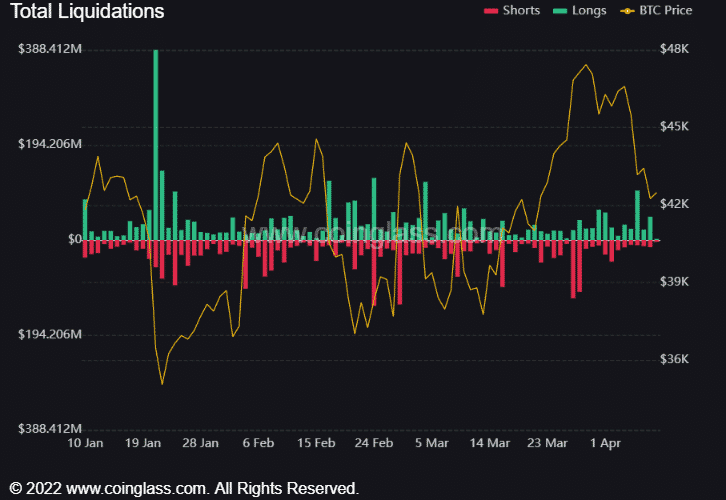 Even coming into Saturday, which usually sees low trading volumes in crypto, BTC longs were being liquidated at a large scale. 73% of the $64 million  BTC positions liquidated in the past 24 hours were long.

Where will BTC go next?

BTC’s sharp fall has markets uncertain over where the token will go next. A worst-case scenario would be the token testing 2022 lows, at $33,000. The token also appeared to be weakening ahead of a halving event on April 11, which will see mining rewards cut by 50%.

Technical indicators and whale activity show that the token could see big gains in the coming weeks. But sentiment is till largely cautious. The BTC fear and greed index is now back in fear territory, after spending the past two weeks at neutral.

The token could also perform better as institutional buying into crypto picks up this year.