Over the last two weeks, Dogelon Mars (ELON) has reported a sharp recovery from March lows. The coin, like many others in the market, is riding an upward wave of improved investor sentiment. But it seems like ELON is very vulnerable to a major sell-off. Here are the facts: 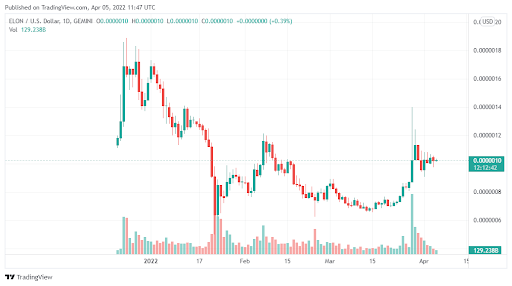 Dogelon Mars (ELON) – What to expect

We knew that it was a matter of time before the ELON rally lost a bit of steam. But it seems the meme coin is reversing faster than expected. After surging to $0.0000014, ELON was trading at its highest level this year, and it had managed to smash past several key resistance zones.

But the recent pullback is worrying. For instance, the meme coin has fallen about 30% from its March highs. More worryingly, it has dropped below $0.0000012, an important support zone that bulls couldn’t hold.

At the moment, it looks like the price is consolidating with very modest losses in the last 24 hours. If bulls are able to find enough demand, $0.0000012 will be the next target. Failure to cross over that price will mean another pullback will be likely.

How to play Dogelon Mars (ELON)?

Meme coins are very tricky because they can swing up and down very fast. But for ELON, there is a short-term play here. So far, the coin has fallen below $0.0000012.

If somehow bulls can take the price above that, then you should consider buying. ELON will add at least 35% of its value above that resistance before any pullbacks. But for now, there is just too much risk to buy right away.