Ethereum (ETH) Volumes Converge With Bitcoin; Will ETH Lead The Next Bull Run?

Ethereum (ETH) volumes appeared to be converging with those in its larger peer Bitcoin (BTC), recent data showed. The world’s second-largest cryptocurrency has seen a spike in interest this year ahead of a widely anticipated shift to a proof-of-stake (PoS) model.

ETH price has surged over 20% in the past two weeks, and was trading at around $3,400- close to breaking even for the year. Daily volumes have also steadily risen, averaging at roughly $20 billion over the past week.

BTC price also shot up to 2022 highs this week, and was trading around $47,000. But while volumes did increase, they were substantially lower than the massive amounts of liquidity seen in 2021. Still, the world’s largest cryptocurrency commanded over 40% of total crypto market capitalization.

But the latest crypto rally has also seen several altcoins vastly outperform BTC, while notching record highs in market capitalization. A similar scenario was observed during the start of the 2021 rally, which had eventually challenged BTC’s dominance.

Data from blockchain research firm Kaiko showed that convergence in ETH and BTC volumes has been increasing since 2021. At certain points over the past year, the seven-day moving average volumes for the two tokens were at the exact same levels.

The data could point towards a broader shift in market structure, where BTC volumes taper further and market liquidity flows into several other projects. The proposed phenomenon is called “Altcoin Season.”

While BTC’s market dominance has so far remained unchallenged, its decreasing volumes could shake this status quo. The crypto market boom in 2021 severely undercut BTC’s market weightage, bringing it down to 42% today, from the massive 71% seen at the end of 2020. 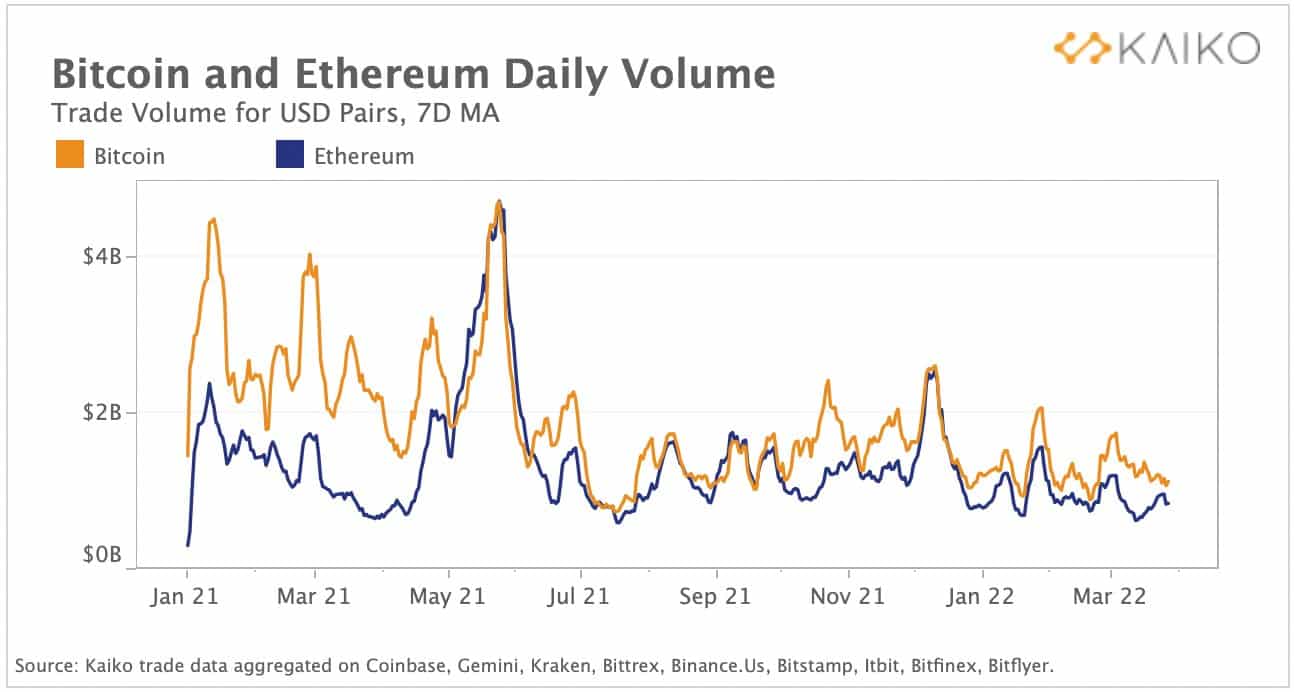 Is it altcoin season?

Tokens including Cardano (ADA), Ripple (XRP), Terra (LUNA) and Solana (SOL) have blown past BTC in the past two weeks, in terms of price performance. Further gains in their market capital could threaten BTC’s dominance.

ETH’s shift to a PoS model has drawn institutional interest into several other projects in the sector. Increasing interest in DeFi, as well as scrutiny towards BTC’s high energy requirements could also draw capital away from the token.

Currently, the top 10 altcoins have a combined market capital of roughly $700 billion, compared to BTC’s $894 billion.