XRP Flashes Signs Of Revival But Where Is It Headed Next? Three months ago, MetaOasis won the championship in Metaverse Alliance 2021 Global Metathon. Three months later, MetaOasis got the most votes and beat 112 competitors in the recent Avalanche Asia Hackathon. Therefore, MetaOasis will become the first project that wins the double in international hackathon competitions in the gamefi history.

What worth mentioning is that Avalanche Asia Hackathon set up an algorithm mechanism which can prevent repeated voting. That’s to say, all votes were from loyal supporters of the project, which makes the votes be of great value, and it also shows that MetaOasis deserve the championship by having the strength with strong and real user base.

MetaOasis is the next-generation game publishing platform linking Web2 and Web3. Meanwhile, MetaOasis will launch the first self-developed big game, making it the core to gather excellent game around the world into MetaOasis.

As the first gamefi that can provides players with a rich and interesting experience like traditional games, MetaOasis is confident that it will attract more traditional players into the platform. Moreover, a series of revolutionary initiatives within the platform will continue to help users and empower developers.

MetaOasis built a “buffer zone” for new users, especially for the traditional internet users to come into WEB3.0. Through the innovative “inter-linked account” mechanism, “buffer token” mechanism, and compatible with the traditional game IAP (In-App Purchase) channel, users can choose either quick registration to experience the platform first or immediate registration for blockchain wallet, which avoids traditional users’ excitement diminishing due to the learning difficulty and financial risks of entering the blockchain space, and enables users to enter the WEB3.0 world more smoothly.

MetaOasis used a professional game engine, and through the disclosed video, we can see the definition of MetaOasis’s frames is at a high level. Moreover, MetaOasis is built by a mature R&D game company with more than 100 employers and a blockchain technology team. Therefore, different from other gamefi which are not attractive enough, MetaOasis offers multiple ways for players to play: battle, construction, exploration, collection, mission, social, etc. For example, MetaOasis encourages players to participate in social activities as well as challenging others in the form of parties, or occupy other players’ lands, and eventually get the rewards! MetaOasis makes gamefi get back to game, and allows players to have fun.

MetaOasis is not only a platform to create content for professional R&D teams, but also a series of strong empowerment by offering instruction of gamefi change for researchers and developers.

MetaOasis changed the situation that different gamefi NFTs are unable to inter-operate with each other with a well-designed solution MNP30(MetaOasis NFTs Protocol, as shown below) for the industry. In a few words, it allows users to accumulate and interoperate their NFTs owning in different games of the platform or other achievements by building a set of exchange standards and protocols, and this will lower the threshold of repeated user investment to a certain extent and also make the value of user accumulation more sustainable. 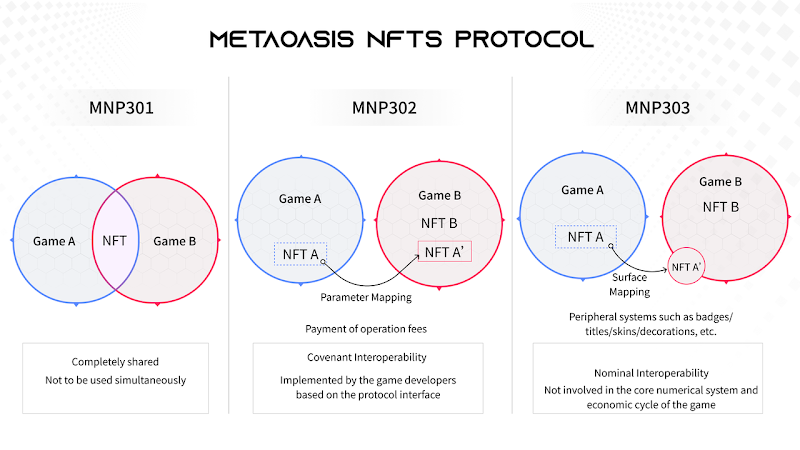 High-qualified content is the key to attract users, therefore MetaOasis hopes that developers focus on applications or games, and provide a series of SDKs for developers to deploy mechanisms without too much effort. Moreover, the SDK is suitable for a variety of platforms and development tools, which means that whether it is a project for WebGL or a traditional game developed by Unreal or unity, it can all be covered. At the same time, based on open digital identity and home, MetaOasis will also offer some development tools to users, allowing all users participate in UCG development.

Content-creators can share the advantages of the platform ecosystem in community traffic, marketing, technology resource, etc, making their works being more likely to be approved in the market. Those contents approved by most people will be shown in the MetaOasis metaverse in the form of special stars, building a game world which keeps developing and changing, together with mainverse games.

Overall, MetaOasis has shown the potential to truly become a next-generation game publishing platform, giving us a glimpse of the new development direction and prosperity of the gamefi ecosystem. Meanwhile, Project CH, the first core project of MetaOasis, has also revealed a large number of milestone achievements with high degree of completion and complexity, which gives us every reason to expect that an epoch-making project will come out soon.

MetaOasis is the next-generation game publishing platform linking Web2 and Web3. MetaOasis reduces the entry threshold of Web2 users by building the infrastructure of Web2 and Web3 integration and also provides a series of tools for Web3 game developers to solve user login and payment problems. Allow developers to focus on making products.

Meanwhile, MetaOasis will release the main universe game that meets the game’s specifications as well: Project: CH, and self-developed ecological games such as “Puzzle Game” and “Embassy Planet” are already online.