Ripple (XRP) could accelerate to $0.82 in the near term

Ripple (XRP) has entered a bullish setup that could trigger a decisive uptrend. The coin has regained an important trend line and will look to build momentum in the coming days. But how far can it go? More analysis below but first, here are key takeaways. 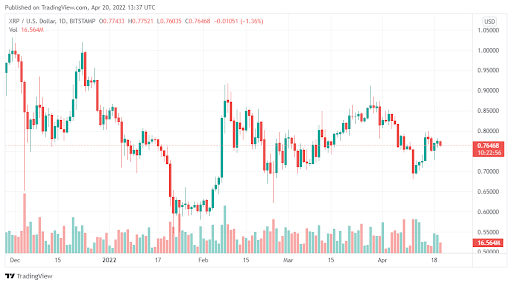 Ripple (XRP) and the upside potential

The broader crypto market has stabilized after a difficult start to April. Although most coins have not reported record-breaking returns, they have held to most of the gains we saw during the March bull run.

XRP added 10% to its value last week and has now entered a bullish setup that could bring additional gains of around 15%. The moment the token smashed past $0.72, it entered an important upper trend line. So far, the coin has held this line and appears poised to surge towards $0.83. XRP also remains steadily above its 100-day SMA, something that adds more support to this bullish thesis.

Despite this, there are still several risk factors. For starters, the relative strength index is still slightly in bear territory. This could make upward momentum very hard to sustain. For this reason, it would be best to approach this setup with effective risk management. In fact, if XRP falls below $0.68, this analysis will become null and void.

Should you buy XRP?

As noted above, some risk still remains for XRP. But the upside potential to gain 15% in the next few days is there. In that case, you can buy XRP but make sure you use small amounts of capital.

However, if you plan to hold the coin for the long haul, then you can buy it without any worries. XRP’s long-term outlook is very positive.