Instagram: www.instagram.com/themba
Facebook: www.facebook.com/themba
Twitter: www.twitter.com/itsThemba
WEBSITE: https://www.clubchinoisibiza.com/
Ibiza’s all-new and much anticipated Club Chinois welcomes South African house star THEMBA for his very own Colours party. It kicked off in spectacular fashion on Wednesday June 22nd and now runs every week until September 28th. The the season will feature a handpicked list of cutting-edge DJs from across the electronic music spectrum including David Morales, Dubfire, Nic Fanciulli, Floyd Lavine, Culoe De Song, Guy Mantzur, Sébastien Léger, Willian Djoko, Salomé Le Chat, Sef Kombo, Eagles & Butterflies, Eli & Fur and many more.
THEMBA is the groundbreaking South African artist who burst onto the dance scene in 2018 with a series of high-profile sets and releases such as ‘Who Is THEMBA?’ which became a chart-topping global smash. THEMBA’s sound is forged from his African roots, incorporating local singers, songwriters and percussionists to create his own unique take on electronic music. He has released on top labels including Knee Deep In Sound, and his ambitious 2021 album ‘Modern Africa Volume 1 (Ekhaya)’ set another high standard.
THEMBA is a regular presence on the world circuit and was a much-loved Ibiza guest at various clubs in 2019. Now he heads up his own unique Colours party which sees him curate line-ups of world-class international talent and showcase his signature sound just as he intends it.
On June 22nd, he was joined by long-time progressive house innovator Guy Mantzur, Angelos and China. On June 29th, he will play with acclaimed French melodic house DJ Sébastien Léger plus Cristina Tosio and Ricardo Da Costa. On July 6th, an all-female line-up features Fiona Kraft and Rebellion artist Salomé Le Chat while July 13th brings Badbox and house dream team ANDHIM. A week after on the 20th is South Africa’s house talent Julian Gomes with the dreamy sounds of Eagles & Butterflies and Italo-Albanian talent &LEZ. Lastly, on the 27th is Miami-based duo Andretta, plus the moody and melancholic house of Eli & Fur and Anastacia.
August brings the sophisticated grooves of Laolu, Nico De Andrea and Paris-based duo Birds of Mind on the 3rd, and South African mainstay Chynaman plays with techno connoisseur Dorian Craft and Ibiza favourite Serge Devant on the 10th. Spaniard Chus and Robin Tordjman then play on the 17th, and 24th August is leading Greek selector Da Mike, plus Cincity and the charismatic William Djoko. On the 31st, another South African star in Floyd Lavine is joined by longtime house legend David Morales and FNX Omar.
September brings one half of Force of Nature, aka DJ Kent, and West African talent Amémé with Airrica on the 7th, then Gab Rhome, Bekzin Terris and SCI+TEC boss Dubfire all play on the 14th. The 21st welcomes Afro house pioneer Culoe De Song, Sef Kombo and Kitty Amor, and the same week THEMBA plays an extended set. Finally, Manoo and Saved label head Nic Fanciulli play on the 28th.
The 3,000-square-meter Club Chinois has already become the most anticipated opening on the island and has been meticulously designed by award-winning Parisian design studio Laleh Assefi. Located in the former HEART Ibiza venue and inspired by the decadent but iniquitous jazz clubs of 1930’s Shanghai, Club Chinois will host international talent from acclaimed resident DJs to superstar artists and headliners, providing an immersive experience of the highest quality. 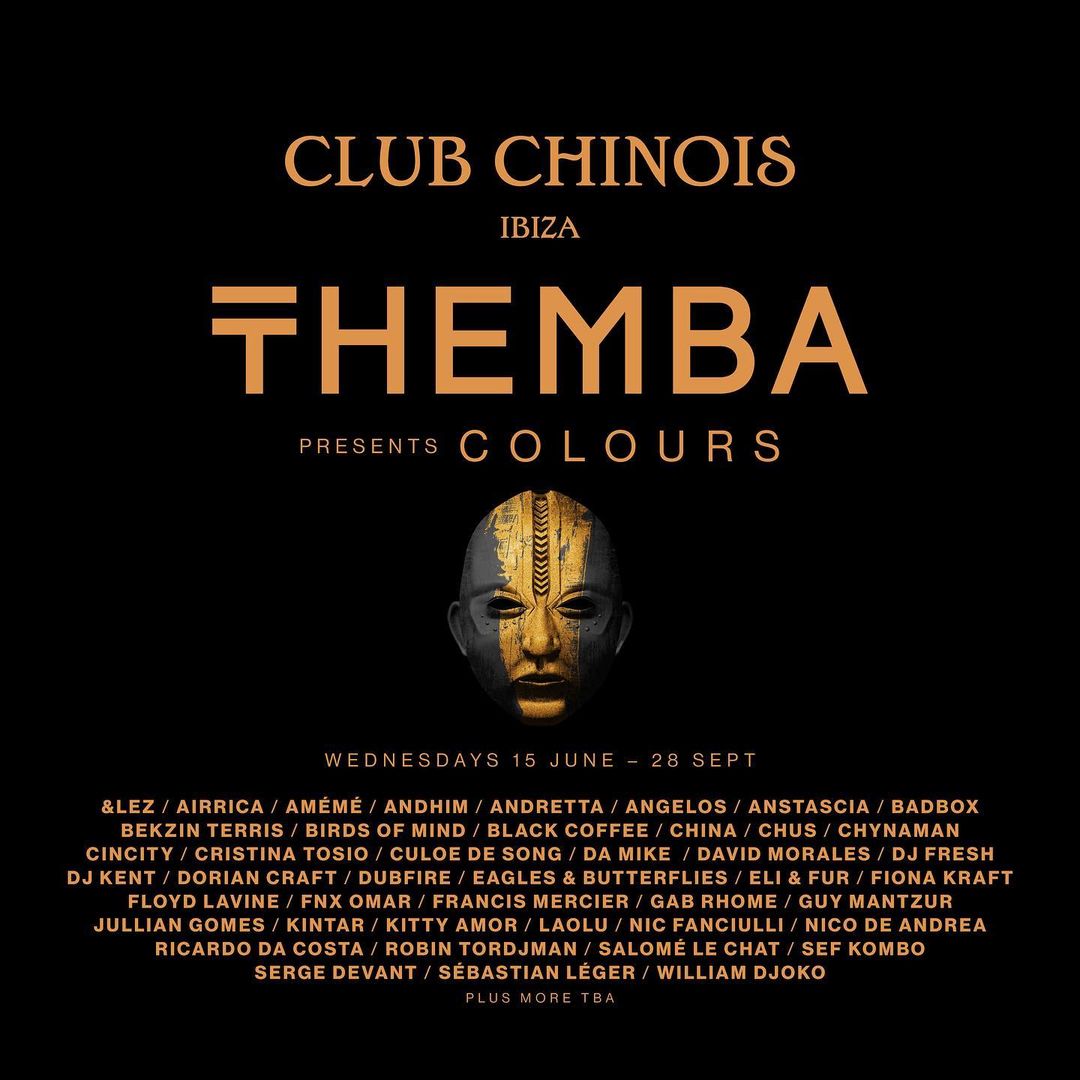