Bitcoin’s (BTC) Latest Tumble Below $30K Driven By This

5 Reasons Why You Should Buy Litecoin (LTC)

Synthetix (SNX) is now the top-performing cryptocurrency over the past 254 hours. While some of these gains are largely linked to a broader recovery in the market, there is also some outstanding platform news. Synthetix is a major DeFi platform that brings traditional financial assets into the blockchain. Here are some highlights. 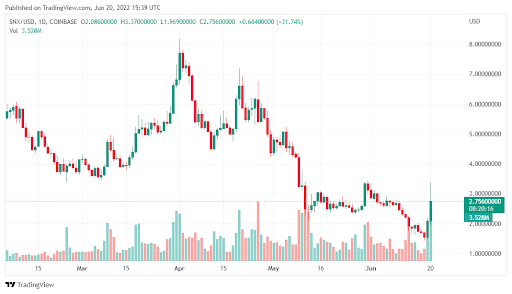 Synthetix: Why the surge will continue

As noted above, Synthetix reported some exciting on-chain news. Just recently, the platform introduced a new feature called ‘Atomic Swaps’. The feature helps to support derivative liquidity on Synthetix. Today, it was announced that Atomic Swap had seen a surge in trade volume. In fact, the platform is now able to process $200 million per day.

This is one of the highest in the market. It beats other competitors like 1Inch and Curver by huge margins. It also seems that investors were quite upbeat about the news. SNX saw daily trade volume surge by nearly 1200%, suggesting that people are buying it in huge numbers.

The price also went up massively. At one point, SNX was higher by 100% before it retreated slightly. As the success of Atomic Swap continues, more investors will buy into SNX. The coin could see a bullish rally over the next 7 days, taking the price closer to $5.

Should you buy SNX

Well, the most important thing for any investor out there is the underlying fundamentals of a project. SNX has everything you would look for in a DeFi protocol, and it’s actually growing faster.

This is a good time to buy for a long-term investor. Also, short-term traders can still ride the Atomic Swap success this week and exit at around $5.