IOTA price gets ready for another 50% meltdown

The last four days have been quite eventful in the crypto market. The news has been dominated by the Terra (LUNA) crash after its UST stablecoin lost its peg with the US dollar. But it appears Tether (USDT), the largest dollar-pegged stablecoin is also feeling the heat. Here are the main points: 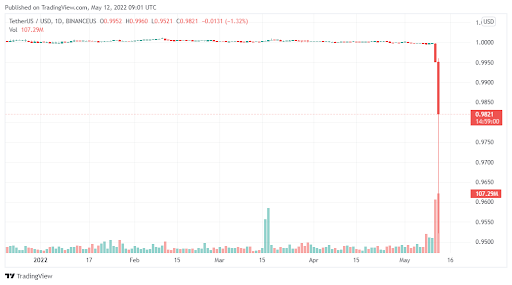 Tether (USDT) is the biggest dollar-pegged stablecoin in the world. It has a market cap of around $81 billion. It may seem like it’s too big to fail, but nothing is guaranteed in crypto. After Terra’s UST lost its peg against the dollar, the catastrophic fallout had a huge systematic impact on the entire market.

UST has somewhat recovered and is now trading at 60 cents on the dollar. But it’s very hard to ignore recent developments. For example, the UST crash may have dented investor confidence in dollar-pegged stablecoins including Tether. Also, USDT has fallen by around 4.8% against the dollar.

At one point during trading in the last 24 hours, the stablecoin hit the lowest level against the dollar in 5 years. As the market continues to crash, investors are likely to pull out their USDT holdings and this could have massive effects on the Tether peg.

Should you be worried?

Well, it’s not the first time the crypto market has crashed. So, even though there is a lot of pain across the board, a recovery will soon come.

However, the downside risks associated with Tether are building, and it will not be a surprise if the stablecoin loses its 1:1 dollar peg in the near term.