Why DOGE will not return to $0.17 anytime soon despite consolidation

Dogecoin (DOGE) has been one of the hardest-hit coins in crypto this year. Investors appear to be deliberately avoiding meme coins due to increased risk-off sentiment. Although DOGE consolidated after crashing two weeks ago, the upside potential remains significantly limited. Here are some highlights: 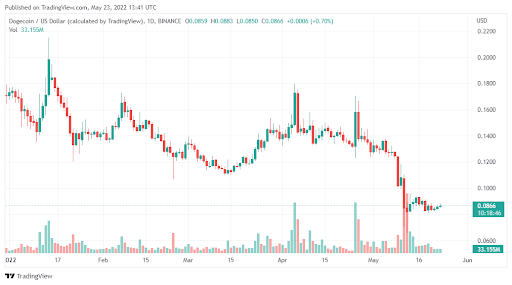 DogeCoin – What does the future hold

Just a few weeks ago, $0.17 was considered one of DOGE’s strongest support zones. Although the coin had reported increased volatility in 2022, it managed to hold off the bears at this price. But $0.17 was eventually lost, and ever since DOGE has struggled to find enough demand to reclaim it.

As of now, the coin will need to surge by at least 100% to achieve that threshold. We don’t think this will happen in the near term. If anything, both fundamental and technical analysis shows the meme coin is facing further weakness.

From a fundamental point of view, worries about slowed economic growth and concerns about rising inflation could push investors away from meme coins. These factors will push DOGE towards $0.04 in the near term.

Should you buy or short DOGE?

Well, the obvious short-term play here is to short-sell the coin and wait for it to bottom at $0.04. However, due to high volatility, ensure there is enough margin to accommodate a price surge to at least $0.09.

However, there could be a buying opportunity for a long-term play. When DOGE falls to $0.04, interested buyers should swoop in right away.